We Call Them Pirates, Part Trois

The bright side: my brother-in-law* wears the hats I have made him a lot... which is why the first one ended up destroyed and the second one got tangled up in some clothes headed for the washing machine. So, here we go again: 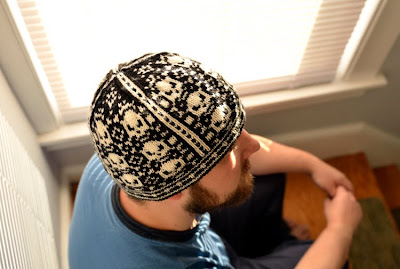 Yarn: Cascade 220 Superwash Sport. Let it not be said that I can't take a hint.

Pattern: We Call Them Pirates by Adrian Bizilia. I love this pattern-- and I know I was just arguing against large motifs in colorwork two days ago. The difference between these skulls and those (damn) whales: fewer rounds with long floats. MUCH less tedious.

Etc: I was thinking about adding an inscription to the inside of the brim-- something like "Don't #$^& This One Up!" I think Josh might actually find that funny-- but the truth is, I didn't mind making it, even for the third time. Handknits should be worn and loved-- there is no better way to return the affection with which they were made. Though I do hope that this one will stand up to a bit more love than the last...


*Whom I previously referred to as "a famous destroyer of knitwear"-- he remains a credible threat, I guess.
Posted by Aimee at 6:00 AM