Hat 28! I can hardly believe I'm typing such a big number-- no moss on this rolling stone. And after a brief retirement, I have decided to resume my career as a hat model: 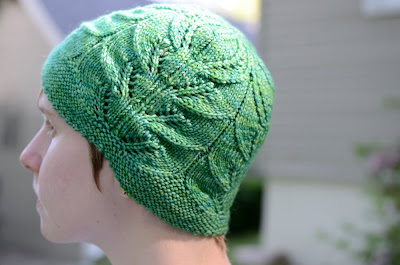 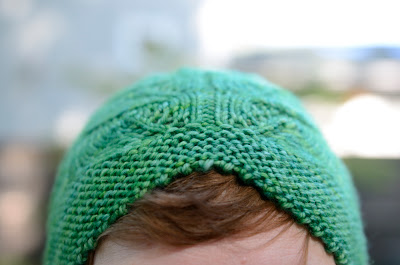 Yarn: String Theory Merino DK-- purchased at the bustling String Theory booth at the Maine Fiber Frolic. If you're a fan of hand-dyed yarn, you have to get your hands on some of this stuff-- the colors are divine, and I have enough left over from one skein for another hat! I love how the variegated green colorway looks in the large-scale lace motif of this hat. Love.

Pattern: Ramona Lace Helmet by Lorilee Beltman. I was looking for a pattern with a leafy motif, and this fit the bill perfectly. The lace panels bend the brim of the hat in the most adorable way-- kind of like a bathing cap from the 1920s.

Techniques: The pattern calls for a Channel Island cast-on, which is very stretchy and creates little picot-like knots along the edge of the brim. It is also my new favorite thing. Check out YouTube for video instructions (here or here). Channel Island requires about the same length yarn tail as a long-tail cast-on... which can be a bit hard to guesstimate. This method works for me almost always: wrap the yarn around your needle ten times-- this length of yarn is equal to the amount of tail you will need to cast on ten stitches. A little math will get you to the length needed for your total number of stitches, to which I recommend adding about six inches so you have enough of to weave in at the end.

The Bottom Line: To say that the leaf pattern reminds me of someone's favorite Irish handbag designer is probably giving too much away... oh dear. If she's reading this, let's hope she forgets by December!
Posted by Aimee at 12:17 PM 2 comments:

I finished my weekly hat a bit early, so I've had time to play. I'm knitting... horns! 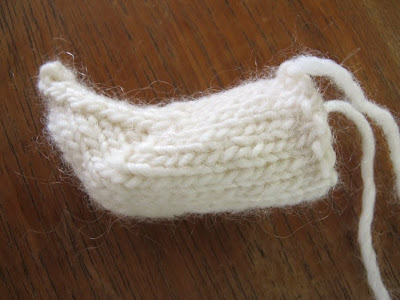 This was my first attempt with short rows-- ugh! 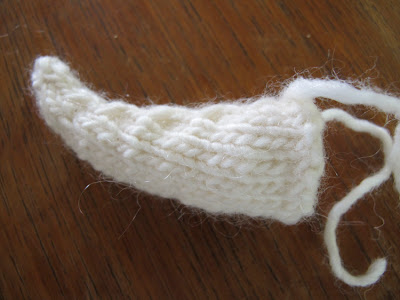 I still have a couple of May hats to catch up on-- this one was a commission from my petite, delightful coworker Marge. In addition to being an excellent nurse, Marge will stop at nothing to boost morale-- her impromptu soft-shoe routines are impeccable, and she is just as likely to sing a show tune or impersonate a basset hound.* So naturally, I was thrilled when she asked me to make a hat to match her lovely red cashmere scarf, which features a cable stitch I had never seen before. Working out the pattern was a challenge, but I was able to duplicate it for the brim of the hat: 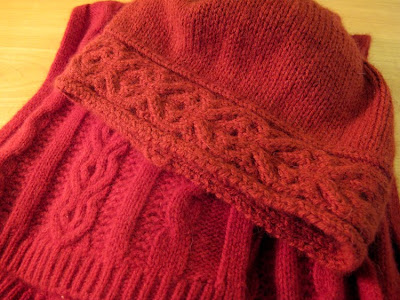 I didn't get the color exactly right, which I regret-- but she likes it anyway: 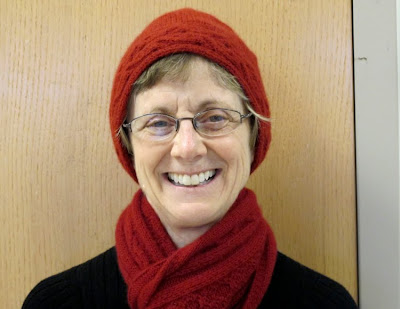 Oh, Marge. Where would night shift be without you?
Project Notes

Yarn: Classic Elite Fresco, held doubled. The texture is soft and dreamy, with a furry halo-- it's not quite as luxurious as the cashmere scarf, but it comes fairly close. However, I'm not sure it's the best yarn for showing off cable stitches... I think it would be better suited to colorwork or lace. Live and learn.

Pattern: I was a bit panicked about inventing a cabled hat-- I can't yet get my head around decreasing cables. In the end, I decided it would be easier to use Coronet by Alexandra Virgiel as my model, substituting the cable stitch from Marge's scarf for the brim.

The Bottom Line: Marge is angling for some way to pay me for making this for her-- we have settled, for the moment, on a bottle of wine-- but when you add up all the hours of entertainment she has provided over the years, I think I'm coming out ahead...

*She also excels at physical comedy-- we have a long history of failed attempts to chest-bump each other.
Posted by Aimee at 11:16 AM 1 comment:

Having passed the halfway point of 52 hats, this has felt like the first week of the rest of my life. Perhaps it helped that I cranked out my 27th hat while watching two marathon French Open matches last weekend*, but I have felt a great surge of productivity and creativity, which I'm hoping will pay dividends in the form of a couple more original hat designs...

Fitting, then, that I have TWO hats to share this week-- both knit from my own pattern! I finished the first one near the end of May, the second on Sunday. 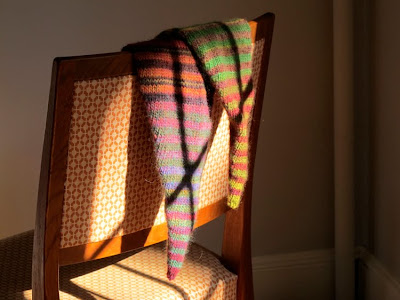 Self-striping stripes show few signs of loosening their stranglehold on my knitting imagination-- these hats are truly addictive. Also addictive: compulsively checking to see how many Ravelers have favorited or downloaded the pattern...

In other news, it hit 95 degrees in Portland yesterday. I have never been much of a summer knitter, and after yesterday, I'm glad I chose hats for my year-long knitting project... rather than, say, afghans or wool sweaters!


*Though it was difficult to knit through the tears I shed watching my back-up husband-- otherwise known as Roger Federer-- lose again to Rafael Nadal.
Posted by Aimee at 8:48 AM 3 comments:

Yesterday, Eric and I headed to Windsor with some of my knitting group friends for the Maine Fiber Frolic. Eric graciously gave me permission to share some of his photos with you-- and modestly requests that you visit his website if you like what you see! 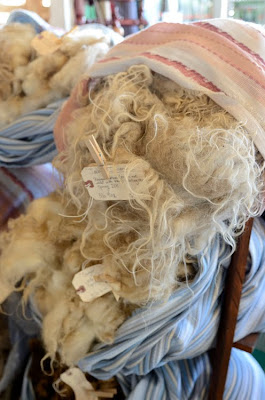 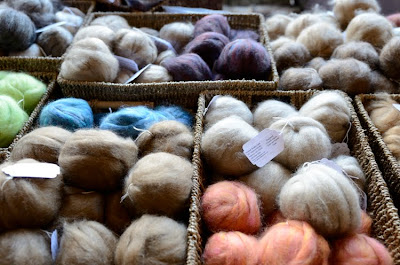 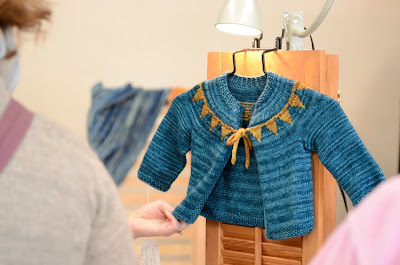 There was plenty of covet-worthy yarn on display, but what I enjoyed most was the feeling of connection to a process that starts with fluffy animals and ends with beautiful finished objects. It gave me a greater respect for the hardworking people who raise the animals whose fiber gives so much use and enjoyment. And of course, respect for the animals themselves: 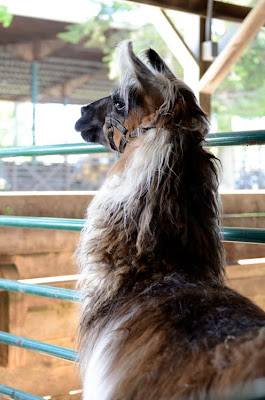 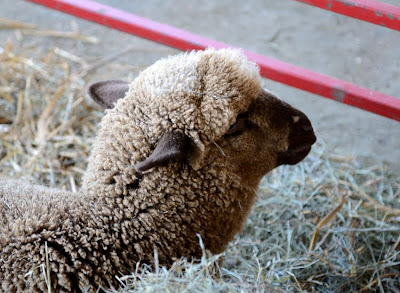 I was particularly taken with this little guy: 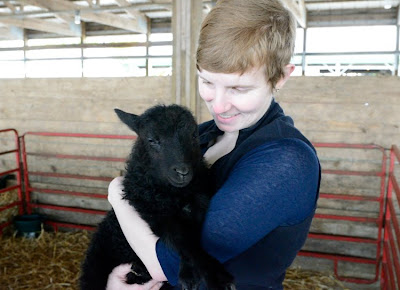 So I didn't end up finishing hat 26 on Tuesday amid the (imagined) fanfare and cheering of adoring crowds-- I finished it a bit more quietly yesterday morning. It's a bit hard to believe that I'm halfway through this project, but time does have a way of marching on after all. 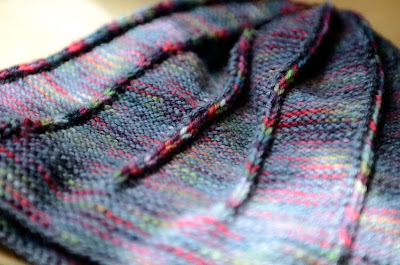 I'm very happy with my decision to start this one over-- you may recall that I found the hand-painted yarn to be a bit garish on its own. Striping it with a solid, neutral color gave me the more toned-down look I was aiming for. The fit might be off just a bit... more on that later.

Yarn: Knit Picks Gloss Fingering-- hand-painted by yours truly! I haven't worked with hand-painted yarn before, though I have longingly fondled many an expensive skein. While those mesmerizing colors are so tempting in the yarn store, they often take on a jagged, sawtooth appearance when knitted up, which I don't really love. I didn't exactly go for a subtle color scheme for my first attempt at hand-dyeing, and I was worried that I wouldn't be able to turn this stuff into anything remotely attractive. Luckily, Knit Picks had just the right color to throw into the mix. I can also imagine striping with bright red for a higher-key effect... and I have plenty left over for further experiments!

Pattern: Pinstripe Slouch Hat (Ravelry Link) by Veronik Avery, from her excellent, recently released book Knitting 24/7. I love literally everything Veronik designs-- she somehow combines timeless styles with perfect tailoring and just the right hit of high-fashion. This pattern is great for showing off hand-painted yarn-- the "knit one below" columns interrupt the color sequence just enough to prevent major pooling. I did find it a bit strange that the pattern calls for the hat to be knit in reverse stockinette... since it's reversible! I followed along anyway and my purling speed is now rather brisk. As it turns out, I purl tighter than I knit-- I have suspected this for some time now, but this hat is irrefutable proof. I think I would have attained more slouch by going up a needle size or two... oh well.

Techniques: I learned another nifty trick for this one: no-purl garter stitch in the round, courtesy of Fleegle's Blog. Using two balls of yarn, you simply change directions after each row-- knitting the right side rows from one strand and the wrong side rows from the other. Genius. Now, I know what you're thinking: why did you bother with this fancy technique to avoid purling on the brim, and then switch to reverse stockinette for the body of the hat? And I really don't have a good answer for that-- I guess it's just been that kind of week.*

The Bottom Line: Fit issues aside, I'm pleased with how this turned out. It was fun to use my own hand-painted yarn-- and if my fiber-enablers have anything to say about it, by next year I will be spinning AND dyeing my own yarn. But before I get too far ahead of myself, there are still 26 more hats to knit...

*On Wednesday, I thought it would be a good idea to go to the discount movie theater in-town Portland, rather than one of the bigger theaters with huge, free parking lots... $7 for garage parking PLUS a $15 parking ticket kind of cuts into the $1.50 I saved. D'oh.
Posted by Aimee at 12:44 PM 6 comments: