This morning I reluctantly released hat 48 into the wild-- I just didn't think it was as good as I could have made it. This guy, however, has no complaints: 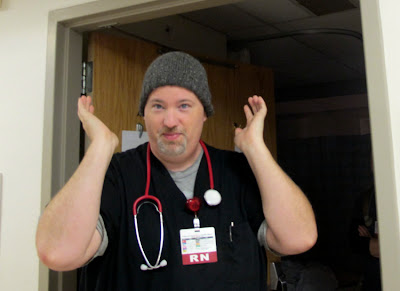 Look out woodland creatures-- he'll be wearing this hunting tomorrow!

I was also somewhat reluctant to leave work this morning-- it's hard to leave unfinished business when you've been practically glued to a patient's bedside for an hour. So I had a real exercise in letting go-- it helps that Bill is super-competent AND thinks his hat is great as is. Still, I couldn't stop myself from assuring him that I had plenty of yarn in case the hat was too short...

Project Notes
Yarn: Knit Picks City Tweed HW. Near the outset of this project, I bought four balls of City Tweed and it's nice yarn for hats because it's very very soft. I don't love it, though-- it lacks body. I wish I had gone down a needle size or two more for the ribbing. I seem to always have this problem with yarns that have high alpaca content-- but awareness has not yet stopped me from buying them.

Etc: My coworkers are caring, funny, capable, hardworking, and generally awesome-- knitting hats feels like the least I can do to show them my appreciation. I can't help wishing that I had made the ribbing just one inch longer, but as my work schedule doesn't always coincide with Bill's, it would have delayed the gift by a week or more. And it's starting to get downright wintry out there-- not the sort of weather to go about hatless.
Posted by Aimee at 5:36 AM