One night at work-- a long, loooong time ago, April I think-- one of my coworkers was boasting about her rapping prowess. I believe she said she could freestyle on any subject, including my knitting. So I proposed a swap-- one knitting themed rap for one hand-knit hat. I think she thought I was kidding: 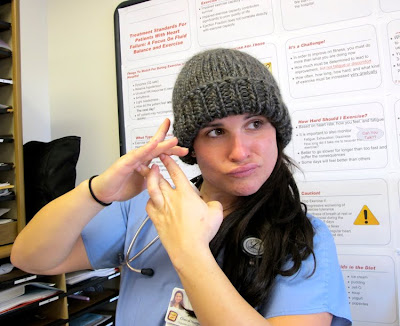 Yarn: Berroco Sundae-- one of the few yarns I have ever bought without a purpose in mind. It just looked so plump and fuzzy. I don't knit much with bulky yarns, but there is something to be said for a two hour hat.

Etc: Now, I don't want to accuse anyone of fronting-- if that is the correct term-- but it's been a few months and there's still no sign of the knitting rap. Miss J, now that the hat is yours as promised, it's time to deliver the goods. I prefer the stylings of Dr. Dre. Represent.
Posted by Aimee at 12:13 PM