Yes, I checked the spelling-- since this pattern is from a Norwegian designer, I'm guessing that's Norwegian for... waffle? I could be wrong. In any event, here is my latest victim, fresh off a three night stretch: 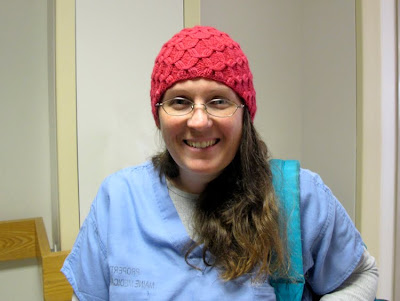 And she still has a smile on her face after a two hour quality meeting... 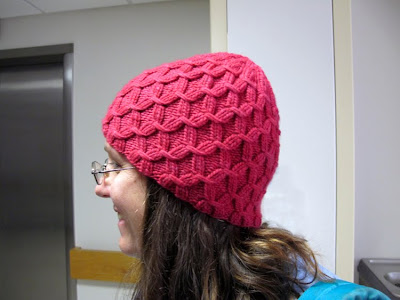 Yarn: Malabrigo Merino Worsted in Geranio-- not an exact match for Nicole's winter jacket, but I think it's lovely with her complexion.

Pattern: Waffel Hat by Anna & Heidi Pickles. Like I said, I think the pattern was originally written in Norwegian, but the stitch pattern and instructions were too simple to be defeated by a less-than-perfect translation. The gathers in the ribbing are created by wrapping the yarn around groups of stitches and then knitting them-- I'm not going to lie, I found this part to be quite tedious, but I love the result!

Etc: Nicole works nearly every weekend and I do not, so it's always a treat when our paths cross. She has invented many ways to liven up the night shift, particularly the weekly narcotics count, which used to be a dreaded task. She also appreciates it when I make up songs about Sugar Free Popsicles, which makes her instantly hat-worthy in my book.
Posted by Aimee at 8:55 AM