This is not attractive: 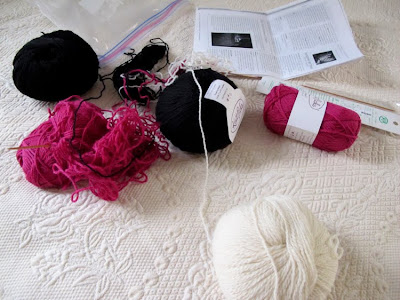 That's the problem with comparing anything to Pandora's Box-- you are then required to open it. Metaphors are dangerous, particularly those involving Greek mythology.

Let's see if I can make some order out of this chaos: 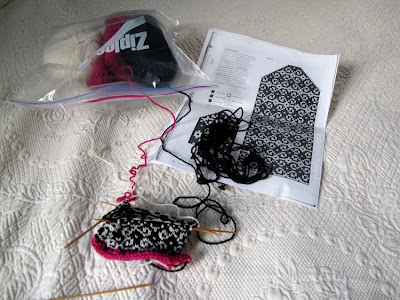 Now you can sort of see what this is supposed to be-- the beginnings of a pair of mittens I promised to someone last Christmas. Note to self: next time you find yourself at an extended-family gathering without a Yankee Trader gift, rather than hastily commit yourself to making a small knitted item of the recipient's choice, SIT IT OUT. 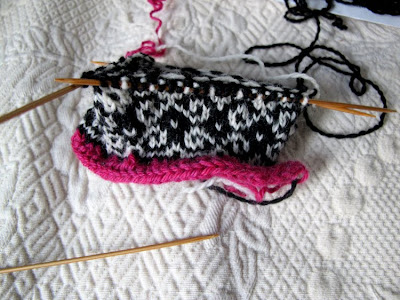 Of course, in the moment I thought, "Black and white patterned mittens? Why, certainly I can make you those. And while I'm at it, why don't I make them out of the thinnest yarn I can find, on the smallest double pointed needles in the world?"

The ancient Greeks had a word for this. I think you know what it is. 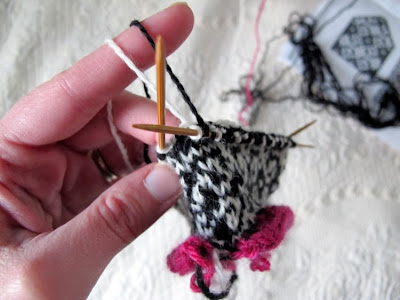 Yup, it's hubris. At least my left-handed stranding technique will get a workout. Did I mention that these mittens also have a knitted-in lining? So instead of two mittens, you are making four!

I am currently blistering through these at a spanking pace of six rows per hour. It's going to be a long month. Perhaps if I wasn't taking such frequent Murakami breaks... 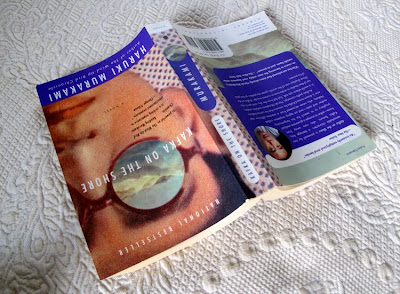 Let's see... the protagonist is a fifteen year old runaway trying to avoid killing his father and sleeping with his mother... what the... damn you, Greeks!
Posted by Aimee at 2:14 PM