Mother Nature is playing a rather cruel-- and not at all funny-- April Fool's joke on all of us here in Maine. I do not in any way condone this, nor do I wish to encourage further hijinks, but I must have a backdrop for my third Quince hat: 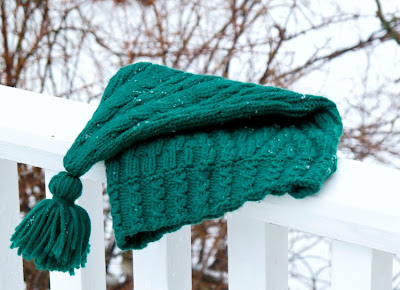 Snow in April-- so unkind. 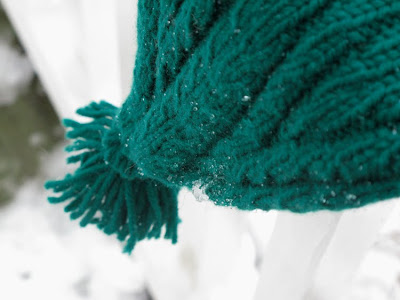 But that is ALMOST the actual color-- way to go, camera!

I must confess, I really love this one. To the point that I'm thinking of keeping it for myself... Alicia, consider yourself warned. I made this for your birthday, but you may have to arm-wrestle me for it.
Project Notes

Yarn: Quince and Co. Lark. This is an unassuming yarn-- and I didn't think I was going to like it at first. It has a very sturdy-- even stiff-- feel in the skein and before blocking the hat, I was able to get it to stand up straight on my head, much to the amusement of onlookers. But it was lovely to work with, and blocking really transforms it-- now it is soft, dense, smooshy, and has just enough drape. At $5.50 for a 134-yard skein, I'll be back for more.

Pattern: Empire by Kirsten Kapur. I have only recently discovered Kirsten's designs-- and her blog, Through the Loops-- but I already have a huge crush. Her designs are so cool and clever-- and this hat was really fun to make. I love how the shifting rib pattern resembles cables-- the brim also features another variety of fake cable. Now, don't imagine for a moment that I don't enjoy cables, but when you can get the effect for half the effort, everyone wins, right?

Techniques: I have never made a tassel before-- it's a straightforward process, but I somehow had a mental block when it came to attaching it to the hat. I couldn't find any online tutorials, so in the end I just threaded the ends of the tie securing the top of the tassel through the hole at the top of the hat and weaving them in using duplicate stitch. I found that it was important to occasionally stitch through the tassel itself in order to properly secure it.

The Bottom Line: Empire may or may not be on my head as I'm writing this. I may or may not be planning to "accidentally" "lose" it before I get a chance to deliver it to its new owner... who, I have a hunch, is going to love it. My infatuation with simple stitch patterns is growing-- and, as I've mentioned before, I think the Quince yarns really shine in simple texture stitches. Also cause for celebration: I met my goal of posting all of my backlogged hats! In spite of Mother Nature's childish pranks, I feel like April is starting off on the right foot.
Posted by Aimee at 12:23 PM