2010 is almost a finished object, and it was a big year for me in many ways, so I can't resist doing a brief post-mortem before I tell you all about hat 4:
Okay, without further ado, here is hat 4: 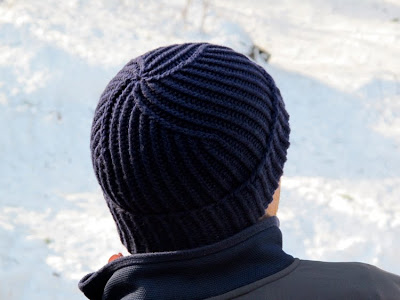 The recipient and I are not getting along very well at the moment, but I'm going to try to keep interpersonal drama out of this blog.* Anyway, it looks great on him, it matches his jacket, and he seems to like it. We both remarked, to our mutual delight, on its resemblance to the hats worn by Team Zissou. So at least we can agree on something.
Project Notes

Yarn: Osprey by Quince and Co. I had been dying to try this new line, which I am lucky to have available at my LYS in Portland, and it does not disappoint. Osprey is a three-ply bulky weight and it is rambunctiously bouncy and springy. I'm a fairly loose knitter, so I started with a size 7 needle. Wrong move-- this yarn begs to be knit on fat needles, and the size 7s were just cramping its style. This is why I ended up knitting from both ends of the ball in last week's WIP Wednesday post. Once I went up to a size 9, it was very dreamy to work with. I plan to use this yarn again-- it's a good compromise of soft and durable, it comes in 37 mouth-watering colors, and the price is surprisingly affordable for 100% wool. A single skein was more than enough for a man's hat with a very wide turned-up brim.

Pattern: The Marsan Watchcap by Staceyjoy Elkin-- another popular pattern on Ravelry. Word on the street is it runs small, but I seem to have avoided that issue by choosing a bulky weight yarn instead of the worsted called for by the pattern. I really love the pattern created by the decreases-- so many ribbed hats poop out rather unattractively at the end. I had to fiddle with the decreases in order to maintain the twisted ribs... more below.

Techniques: To grasp this pattern, you need to understand the concept of stitch orientation. I won't go into gory details here, but suffice it to say that each individual stitch has a front leg and a back leg. Knitting as I know it mostly involves pulling loops through the front leg of each stitch-- there are many, many other ways of knitting, and that's about as far as I want to open that can of worms. If you pull your loop through the back leg of the stitch, you create a twist in that stitch. In this pattern, you knit into the back leg of every knit stitch, creating a twisted rib with a sculptural look. To return to the decreases... the pattern calls for a left-leaning SSK decrease. Worked the usual way, this does not twist the stitches... so I fiddled. When I came to a decrease that consumed a purl stitch, I slipped the knit stitch purlwise, slipped the purl stitch knitwise, and then proceeded to knit them together like a normal SSK. This twists the knit stitch, but not the purl stitch. When I came to a decrease that consumed a knit stitch, instead of doing SSK, I knit both stitches together through the back loops. This still creates a left-leaning decrease, but at the same time, twists both stitches. And that's about enough knitting pedantry for one post, don't you agree? I should probably come up with some kind of disclaimer...
The Bottom Line: I squeezed this hat in to my December line-up, and it makes an excellent last-minute knit. I'm pleased with the result. It's pretty much the ideal man hat... alright, I'll admit it, I was nearly bored to tears before I got to the decreases. Unlike stockinette, ribbing requires more than minimal attention, but-- for me, at least-- doesn't offer anything rewarding enough to compensate. Give me some colorwork, or lace, or cables any day.

I'm on track to finish hat 5 before the end of 2010. It's exciting to be starting a new year with a grand knitting project already underway. I'll lay out my January hat lineup-- and other hopes for 2011-- in my next post. Happy New Year to everyone!

*I do, however, reserve the right to wallow in purely personal drama-- consider yourselves warned.
Posted by Aimee at 6:14 AM

Email ThisBlogThis!Share to TwitterShare to FacebookShare to Pinterest
Labels: FOFriday