I officially completed hat 3 for 52 hats on Monday! While I wouldn't exactly call it an original design, it's at least a somewhat original mash-up. This really got my creative mojo working, and now I have at least a half-dozen other design ideas that I hope to bring to life-- and share!-- in the course of this project. So without further ado: 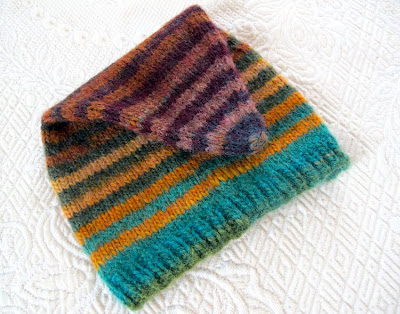 This is for my nephew. He's seven and LOVES bright colors. At first I was only going to use one color of self-striping yarn, but the colors seemed too dull on their own. It's certainly not a new idea to alternate two colors of self-striping yarn (see the famous Noro Striped Scarf from Brooklyn Tweed), but I had never seen it done in a stocking hat. 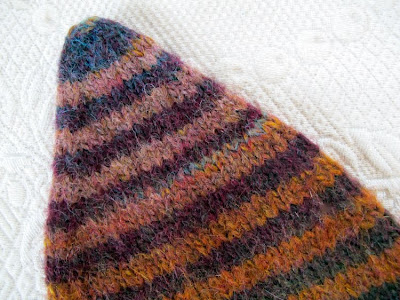 Two photo hat close-up! There is no way I could have planned this! 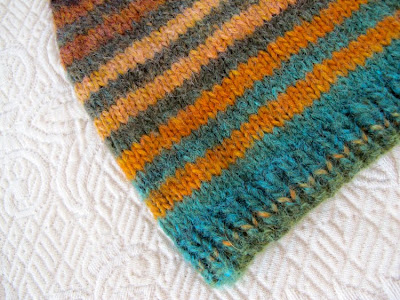 I like the result, and it was SO much fun to make. I have loads of yarn left, so I'll probably make a few more-- I'm planning to write this up as a free pattern, but I think it needs some tweaking first.

Yarn: Amazing by Lion Brand. It seems I'm not alone in loving this yarn-- all the craft stores in my area are out of stock! Ravelry lists is as Aran weight, but I think it knits up well at a worsted or light-worsted gauge. One word of caution: it's SUPER fuzzy and tends to mat together as you work with it. This makes the knitting just a tiny bit slower than usual, and might drive you bonkers if you have to tink back multiple times.

Pattern: l o o s e l y based on the Voyageur Cap by Tina Shaddox. I started modifying from the very first row, and I've lost track of all the changes I made! I had never knit a stocking hat before, so I was unsure of how to shape the top. This pattern was a great place to start. Ideally, I would like the hat to be quite a bit longer because more length = more awesome stripiness. As I said, I'm going to continue tweaking.

Techniques: In my WIP Wednesday post last week, I talked about some of the techniques I used for this hat. Making stripes in the round can be irritating if you're a perfectionist... not that there's anything wrong with that. There are many methods for jogless stripes (check out this awesome tutorial at TECHknitting). I thought I was using Meg Swansen's method (tutorial here), but it turns out I was doing it wrong! The stripes ended up pretty close to jogless anyway. I used this method to carry the yarn between color changes, and I used Kitchener stitch to close the top of the hat-- totally not called for by the pattern, but satisfying nonetheless.

The Bottom Line: I love this-- I know I say this every week, but this time I REALLY mean it! I love to knit, but I really enjoyed the hell out of making this. The mesmerizing color changes and the soft fuzziness of the yarn were truly delightful. If my nephew enjoys wearing it even a tiny fraction as much as I enjoyed knitting it, I will consider it a blazing success.

I'm off to knit the last few rows of hat 4 and to check out what progress the other elves are making at Tami's blog. Here's hoping all of your Christmas WIPs will become FOs by tomorrow!
Posted by Aimee at 6:51 AM