As of 9PM Monday, my WIP count is back to a happy place-- Huzzah! So in honor of WIP Wednesday, I thought I would share a couple of tricks related to one of my current projects-- a snowflake hat I'm making for a coworker: 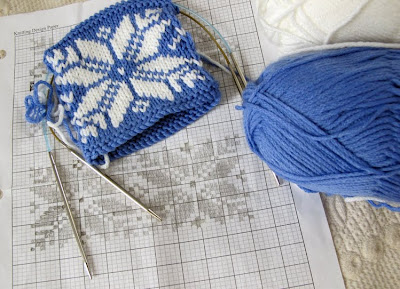 Mary Lou wants snowflakes, so Mary Lou shall have snowflakes!
I don't always swatch for hats-- almost never for a ready-made pattern or a plain hat, unless I'm using an unfamiliar yarn-- but since I've waded into the fascinating waters of knitting design, I'm doing it a lot more... and since I typically make hats in the round on circular needles, I use an unusual method of making a gauge swatch. I hesitate to say I invented it, since anyone with average intelligence and a bit of knitting experience could probably figure it out on their own-- in fact, I'm sure they already have-- but that's no reason to keep it to myself, right?

The idea came to me a little over a year ago when I was having gauge woes over a sweater and feeling like Fortune's fool. I knew a flat swatch would give me a less-than-accurate prediction of in-the-round gauge, but I didn't have the patience to make a huge swatch. I tried this method for knitting a circular swatch flat, but I found it unappealingly messy.* DPNs were also not an appealing (or accurate) option. I initially dismissed the idea of making a small tube on two circulars because I didn't have two circular needles in the same size. And then it hit me: I could use DIFFERENT needles and test gauge for TWO sizes simultaneously!

The delight over my own cleverness faded as I realized that I do not enjoy knitting on two circulars... at all. But the method has endured in my repertory because it has a number of advantages:
OK, tip two: Stranded colorwork photocopies REALLY well.
Now you can stop staring at your coworkers' hats in an attempt to memorize the pattern-- they will thank you for it.

*TECHknitter recently published an improvement on this method-- brilliant. Though probably extremely tricky to work in two colors.
Posted by Aimee at 6:00 AM