My month of Quince & Co. yarns is almost at an end, so it's time to start rolling out some fabulous Quince hats. The first hat puts me at a milestone-- 13 is 25% of 52! This month has really captured for me what the 52 hats project is all about-- trying lots of unfamiliar yarns and patterns AND cranking out tons of handmade gifts. If I ever find the time, Rosalie here will be joined by a matching cowl and gloves-- a perfect little gift set for someone special. 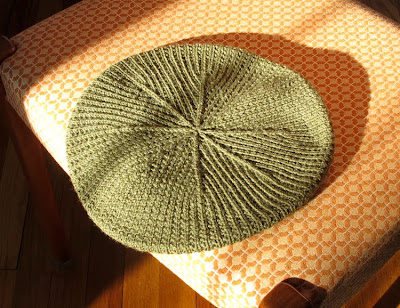 It has a certain je ne sais quoi, no? And it's shiny.

Yarn: Quince and Co. Tern. This is such a refined, grown-up, luxurious yarn. It's a silk blend, and the colors are more muted and shimmery than Quince's other offerings. I had a hunch it would drape beautifully-- perfect for a slouchy beret.

Pattern: Rosalie (Ravelry link) by megi. The pattern, as I gather, was inspired by a hat worn by a character in the Twilight movies... anyway, I was drawn to the subtle texture of the stitch pattern, but I knew I would have to fiddle a bit to compensate for using lighter weight yarn. I must confess that I did not make a swatch-- I just did some math and hoped for the best. The pattern didn't give a row gauge-- note to self: always include row gauge in future pattern writing!-- so I was unsure how long to make the hat before decreasing. It didn't come out as slouchy as I envisioned, but now that I have the recipe, I can cook up some variations.

Techniques: Nothing to write home about-- though the pattern does call for my favorite double decrease: S2KP! That stands for: slip two stitches together knitwise, knit one, pass the slipped stitches over. It has no slant and traces a very prominent line across the fabric-- the asterisk pattern on the crown of the beret? That's S2KP!

The Bottom Line: I loved working with this yarn in this stitch pattern-- I find simple textural stitches to be very satisfying, especially in luxurious yarn. I also think this yarn would utterly rock in an intricate lace stitch. For some reason, I can't see myself wearing it-- perhaps it's my general lack of refinement, but I tend toward fuzzier, more rustic-looking yarns when I knit for myself. That's one thing I love about knitting gifts-- choosing just the right yarn and pattern to suit a particular person. Though sometimes my finished objects choose a different owner than I had originally intended-- tomorrow's hat will be a case in point!
Posted by Aimee at 1:00 PM