I knew gauge was going to catch up to me at some point in this project. I haven't been dithering over it much-- with 52 hats to make, I don't really have the time-- but my current project has me fretting big time. I'm starting to lose sleep over whether this damn hat is going to fit-- it's gotten to the point that I don't want to keep knitting for fear that further efforts would be wasted, but I also refuse to start over. The only way to resolve this impasse is to try it on.

I have about five inches of hat stub here. It looks so nice-- it would be a shame to frog it. And dagnabit, I'm on a deadline! 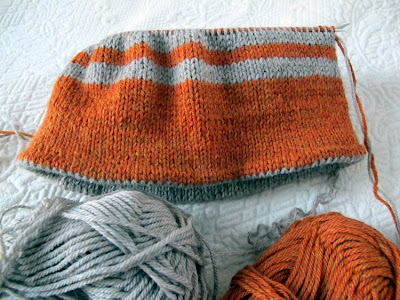 I slip the stitches onto a length of crochet cotton so I can measure the circumference of the hat accurately. 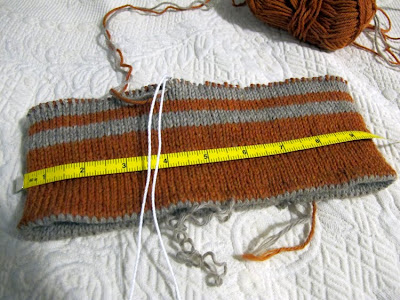 It's two inches smaller than I anticipated... curses. Maybe it will still fit. Let's see if I can get my husband to try it on... 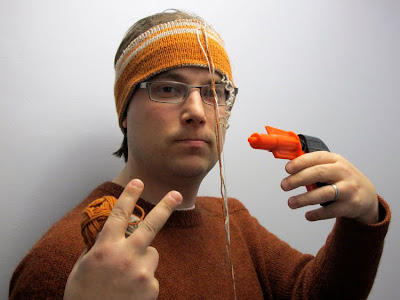 Note the sweater-- I made that!

I also took advantage of the opportunity to measure how much more noggin the hat needs to cover-- I have about four more inches to knit, including decreases... still have to figure out how to decrease in double knitting. That reminds me, I should show you the other side: 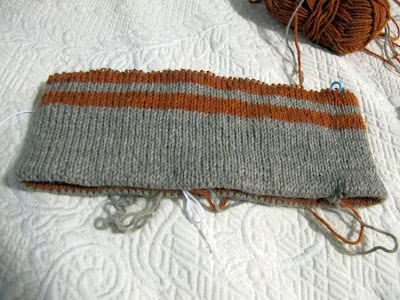 It's reversible! It also looks as though I have a tiny bit of hem flare going on-- so embarrassing-- but at least it fits. Now the big question is... can I finish it by Friday? Stay tuned.
Posted by Aimee at 2:32 PM