Rule of Three (Plus One?)

Is there such a thing as too much knitting? I used to think I knew the answer, but this week I'm not so sure. There are quite a few things piling up in my work basket, and for some reason, it's making me sad. 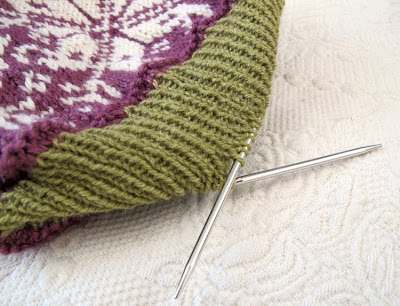 This one has been the major trouble maker. It was a last-minute addition to the February hat line-up almost three weeks ago, and has now been frogged and restarted-- twice! Trouble is, each time I decided to start over, I also cast on another hat: 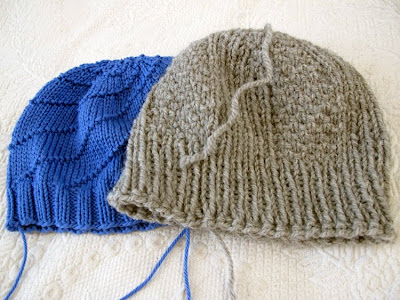 True, these are almost done. An hour's more work will bring them across the finish line. But I just don't wanna. 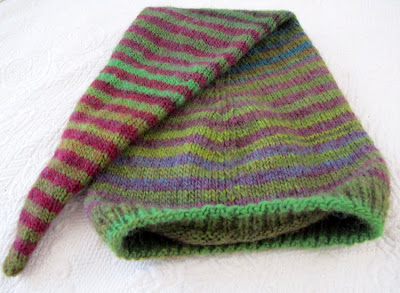 This one may appear to be finished-- but don't let that fool you. I'm still trying to write up the pattern, get some nice pictures of it, and figure out how to get it onto Ravelry. This is all new to me, and therefore seems a lot more daunting than it probably is in reality. I hope that by the end of next week, I'll be kicking myself for not getting it done sooner.

Now, depending on your level of comfort with unfinished projects, four WIPs may not sound like a lot. For me, it seems to be perhaps one too many. With three WIPs, I feel energized and productive-- with four, I get cranky. I start thinking about all of the other things I'd rather be knitting-- magical NEW projects with NEW yarn. And the more time I spend daydreaming, the less time I spend knitting-- the less I knit, the more stale and unlovely those WIPs become.* 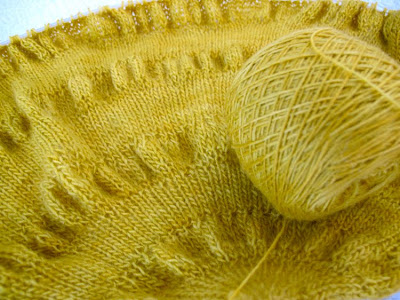 It hasn't grown much since its blog debut and that doesn't bother me one bit-- the process of knitting it is so delightful that I almost never want it to end. A project like this contributes nothing to my WIP anxiety-- so I guess my project-sanity limit is three... plus one more that is purely pleasurable and almost completely mindless. Now if I can just get my WIP count under three...
Since it's Wednesday, and I'm writing about WIPs, it seems like a darn good idea to link up with WIP Wednesday again. There's sure to be lots of pretty and inspiring craftiness on display, so be sure to stop by!


*And wasn't the plan to knit ONE hat per week... did someone not get the memo? Sheesh.
Posted by Aimee at 6:00 AM