Valentine's Day is my pre-marriage anniversary with my husband. It all started when he drove to my house on a snowy night bearing the hand-made card that declared his love-- which was pretty obvious at that point to everybody but me. Fortunately-- for both of us-- the feeling was mutual. That was 1996... and I turned 30 last year... yeah, go on and let it marinate. I've seen that shocked look before-- trust me, you'll be fine in a minute.

Among other things-- you know, like the extinction of the dinosaurs-- our relationship pre-dates my learning to knit, so I thought it would be fun to look back at some of the stuff I've knitted him over the years. Starting with my very first FO: 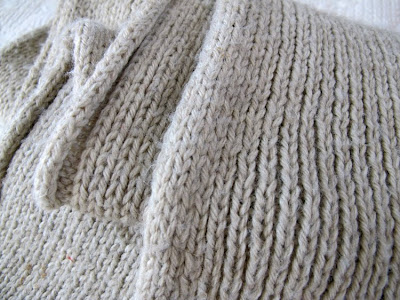 Made from the finest Lion Brand Wool-Ease-- and copied from Nicole's* GAP scarf.

I am inordinately proud of this scarf because a) I "designed" it; b) I am amazed that as a brand new knitter I understood the properties of k1p1 ribbing and stockinette-- note the handsome curled selvedge; c) look at those stitches! Did I mention that this is my first FO? Ever? Okay, I'll stop bragging.

His next gift was my very first hat: 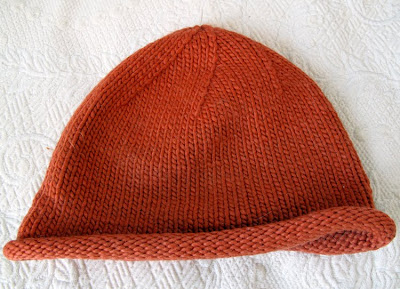 Note the orange-- you'll be seeing a lot of it.
I had discovered Lamb's Pride Bulky, which became my go-to yarn for the next six or seven years. This dates from about December 1999-- it's held up pretty well, eh? I always liked the distinctive slant of the stitches-- which I now know is a feature of singles yarn. 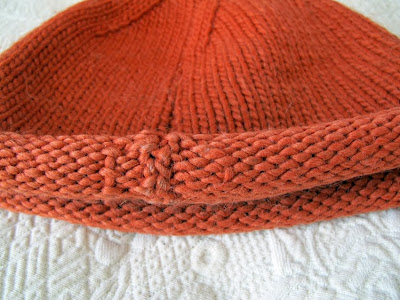 I had not yet discovered knitting in the round-- I followed the pattern, knitting the hat flat and then seaming it... sort of. I did the same with the matching mittens: 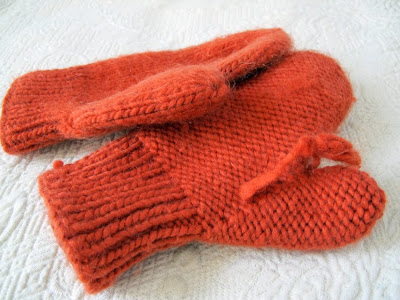 I just discovered I forgot to weave in the ends-- he has never, ever complained.
After these, I gave up seaming for a LONG time-- only in the past year have I forced myself to learn how to do it the right way, and now I find it somewhat enjoyable. His next hat-- c. 2004, I think-- was knit in the round: 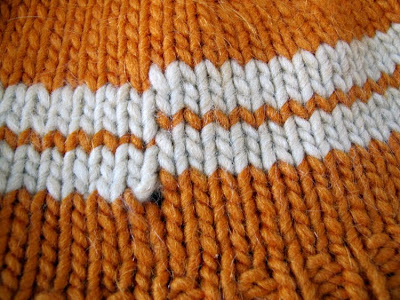 This is how I learned that stripes do not line up when you knit in the round
In between the first and second hats, we lived in California for a couple of years, so I wasn't forced to look at the seamed hat very much. When we moved back to Maine, I decided he needed more aesthetically pleasing (to me) headwear. I guess I was hoping that he would gratefully put hat 1 out to pasture. But no: 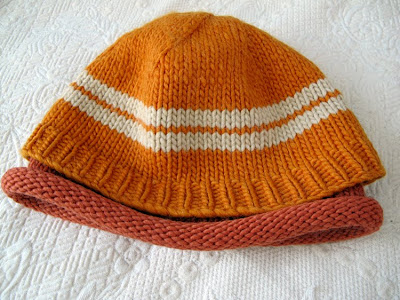 He just wore it inside of hat 2. To this day, he likes to expound on the virtues of wearing two hats at the same time... and I do my best to hide.

I didn't get around to knitting him a sweater until he got around to, ahem, marrying me in October 2009.** By that time, the knitting bug had bitten hard, and I had joined Ravelry. Elizabeth Zimmermann's seamless hybrid was all the rage, and I climbed aboard the bandwagon: 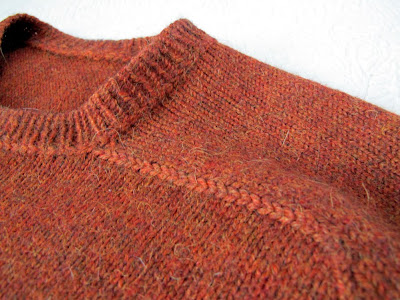 He has worn this at least twice a week for the past year. He's also dropping major hints that he'd like another one-- unfortunately there are some hats (43, I believe) standing in the way at the moment.

That's not to say that the 52 hats project has been of no benefit to him: 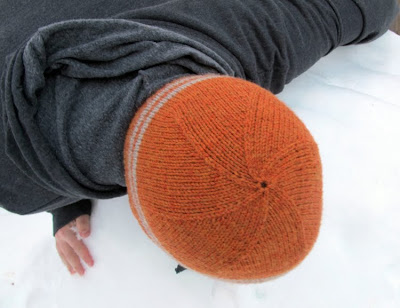 What can I say? Man likes orange.

I've been over this hat and its perceived imperfections before-- what's more important is that he loves it (and has given up the double hat-- yes!) 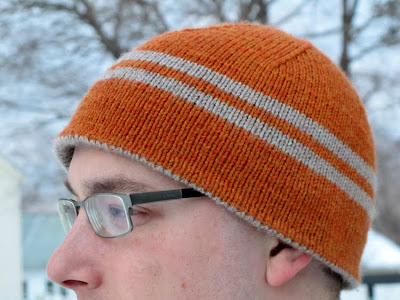 And haven't I seen those stripes somewhere?

He says the gray side is for when he's feeling grumpy. I guess you can take the silly hat away from the man but you can't take the silly out of the man... or something. 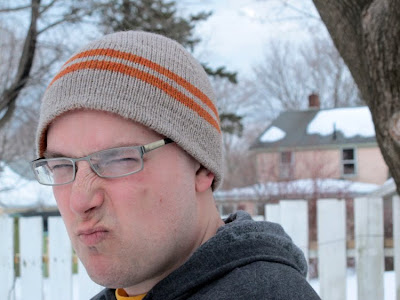 Hands off, ladies-- he's allll mine.
So there you have it, a love story in knitted objects-- though I think it would be impossible to show him in stitches, or words-- or anything-- how much I love him. He always gets the first of everything-- my first scarf, my first hat, my first mittens, my first sweater, my first double-knit hat-- and in my eyes it isn't always my best work. Somehow, he seems to only see the love.


*Nicole and I were freshman year roommates in college and we learned to knit together-- our friendship and mutual love of crafty things endures to this day. What can I say, I know a good thing when I see it!