November 30th was the last day of 52 hats, and this is my last hat. I've had this one in mind for almost the entire project-- longer than that, really. I've made a series of fuzzy, white hats since I began knitting, and I was never fully happy with any of them. This time, I had the benefit of a whole year of hat-making-- and wearing-- to help make this one just right: 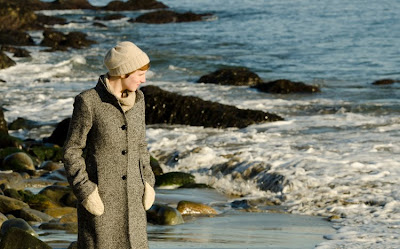 We went to the sea once again... 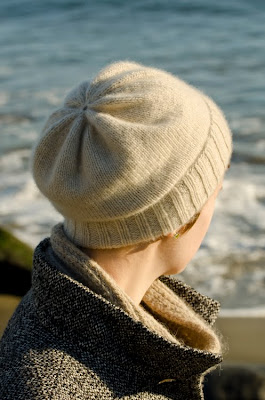 I feel so lucky that it's only a short drive-- or walk! 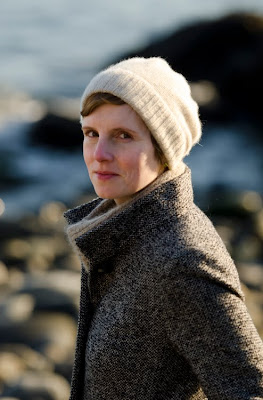 I'm also lucky to have a husband who takes fantastic pictures 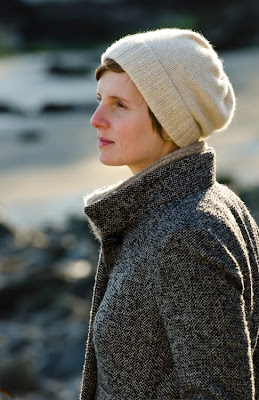 Yarn: Springtide Farm Cashmere. I can't describe how impossibly soft this yarn is-- I have felt cashmere before, but this is... beyond. And it costs less per ounce than white truffles or beluga caviar, with the added bonus that you don't have to eat it. Though you may want to-- I won't judge.

Pattern: Simple Pleasures from the Purl Bee. This pattern appealed to me because of its simplicity-- it really lets the yarn shine. I modified pretty heavily to get the fit I was looking for, but I think I stayed true to the spirit of the design.

Modifications: I didn't want a super slouchy hat-- and I knew I didn't have enough yarn to make one! I knit only four inches of ribbing and began decreasing when the hat measured 6.5" above the brim. This gave me a total length of 9.5"-- just the right amount of slouch for me. I also did quite a bit of fiddling with the stitch count. I liked the look of the fabric at 5 stitches/inch, so I planned to cast on a few more stitches than called for by the pattern. I also wanted to get the ribbing to fit just right-- cashmere lacks elasticity, so I went down three needle sizes and I cast on enough stitches so that the brim just fits my head when fully stretched. All of this tinkering involved making several swatches, but it was worth the effort-- I didn't want to use up all that lovely yarn on a hat I never wear!

Techniques: Halfway through knitting the ribbing, I noticed that the wrong side-- i.e. the side that would show when the brim was folded-- looked terrible. When I reached the end of the brim, I started knitting in the opposite direction, so that the nice looking side of the ribbing would show. Changing directions like this can leave a hole, so I used the shadow wrap method to conceal the evidence. Next time I do any short rows, I will use it again-- pure genius!

Etc: Though I have made more complicated hats, this one brings together so much of what I've learned in the past year-- and maybe just a small part of why I started this project was to end up, at the end, with one perfect white, fuzzy hat. I'll admit I was a little sad to finish it, even though I love it and it's perfect in every way. My project is over, and I don't think the full impact has hit me yet-- this being the season of deadlines, I have found plenty of uses for my free time. There is still a bit more to say before I call it a wrap, so stay tuned.
Posted by Aimee at 8:40 AM